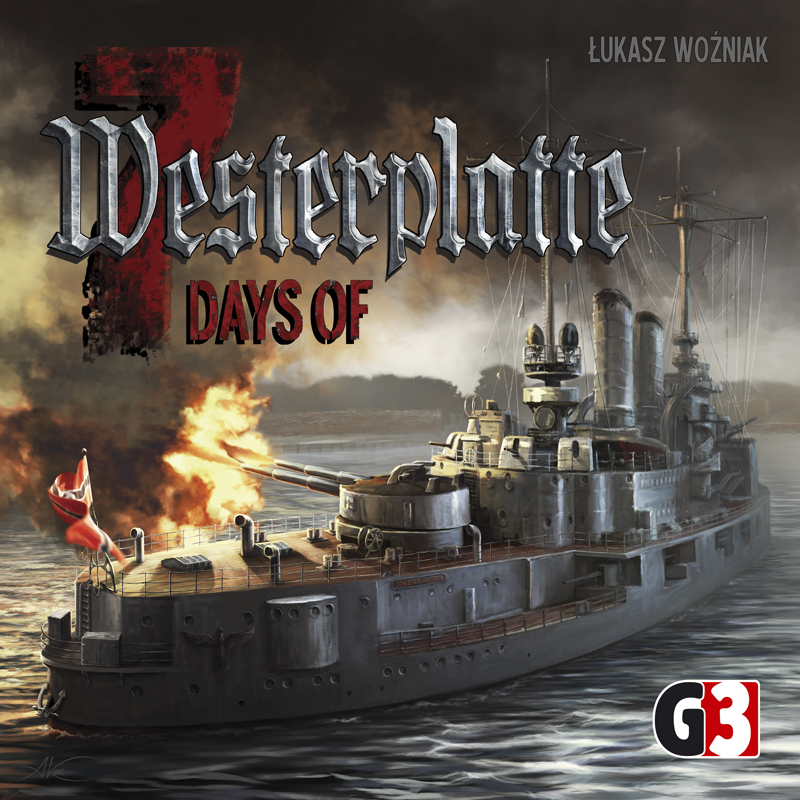 History is on the march! No chance you’re right in front of the steamroller of history at Westerplatte on September 1, 1939. You do not know Westerplatte? There is no shame in this, it is far. This is a small peninsula near from Gdansk, occupied by a deposit of the Polish army. The German battleship Schleswig-Holstein German Navy was anchored nearby, on a courtesy visit. Moderately courteous sailors! At the dawn of September 1 this battleship fired the first shells of the Second World War, 280 mm shells, at close range. The bad news is that you are right in front, with a deposit and two hundred guys to manage!

In fact the garrison resisted for seven days against the battleship, the Stukas and the onslaught of SS. Unfortunately this heroic fight was very isolated as Poland collapsed quickly, the declaration of war by the French and English has not turned the tide. The resistance of Westerplatte is the Polish national pride, there was even a movie recently (it’s not Spielberg but it allows viewing). 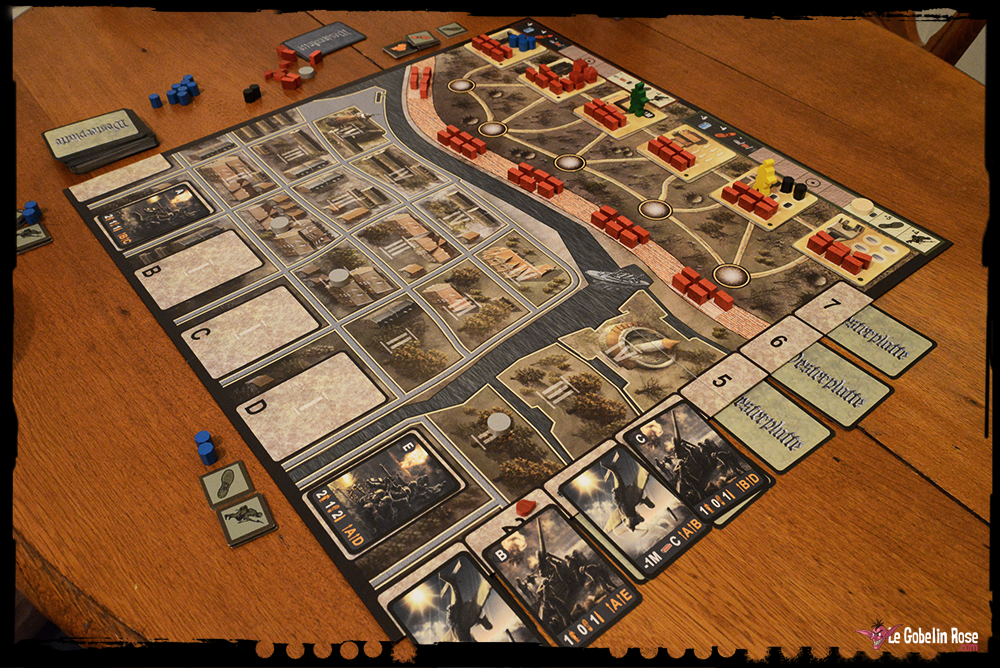 Game 7 days of Westerplatte recounts the events by putting you in the position of defender. Players will cooperate in order to take as long as it is possible. It’s possible to play solo which is rare enough to be noteworthy. The rule of the game is available in English, German and Polish, is only seven pages and is well illustrated.

The red walls of the Forbidden City

The greater part of the game board represents the peninsula and the port of Gdansk, there is a little water and a battleship who dabbles in it. North is Westerplatte six positions “back” with several buildings, five advanced positions and walls to protect all the fortifications. Lots of walls represented by small cubes of red wood. A priori, the walls are not built to be removable, but when you strongly pull on it, it changes everything. On the other side of the water there are five lines of advance occupied by the German army.
The principle of the round is easy. Each player is represented by an officer (a guy made of wood ) who can bring both movements and actions during their turn. The action is to pull back the Germans from an outpost or use the capacity of a building from the rear.

A mortar? Building from the bottom left!

The six buildings in the background allow six different actions. You can shoot mortars at a German unit, place mines on a line of march, rebuild two pieces of walls, take ammunition. More subtle is the ability to push back enemy troops or to boost the morale of his unit.
After a player has completed its actions, it is the turn of the invader to play. German units in range open. Their goal is to destroy the red walls. First those placed outside and protecting those directly behind buildings. If two buildings lose protection the game ends by the Polish surrender.

At the gun Franz!

German troops are mainly composed of infantry armed with machine guns, mortars and Stukas. After firing units already on the ground, a new card is drawn. If it is a troop the card indicates which of the five axes of advance is used. The card also enables the advance of other troops located on a given axis (A, B, C, D and E). Mortars do not move and can open fire on their starting position but the infantry with machine guns must go through the canal, which implies forward three spaces.
Some infantrymen are moving fast, the other less. Some are more resistant to fire (1, 2 or 3 points of resistance) and even some shoot with more strength in the walls than others.

Things fall into place smoothly, the mortar is very useful to calm his counterparts across. Place mines here and there is fun without sharing. Yes but it has an end, because the ammunition of both weapons are counted. Moreover attacks stukas undermine morale. And when the moral decline the officers drag and lose ammunition. It is well worth spending time in the building that made up the moral? Raise morale above normal allows you to enjoy useful tips. 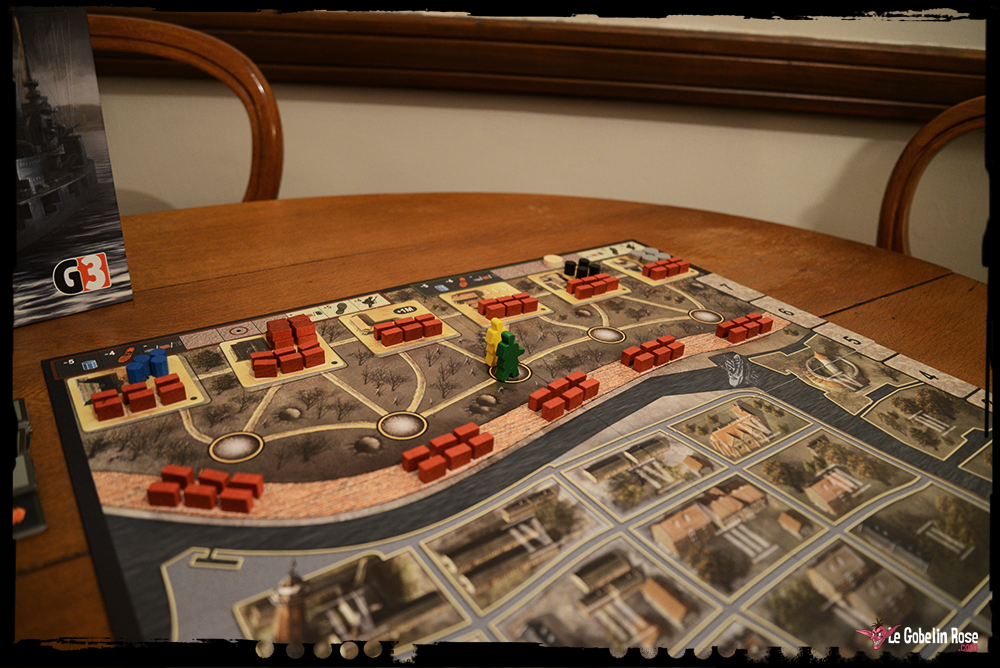 It should take as long as possible. The trick is that the time is not counted in turns. Not to resist must take down enemies! This is the progression of the muck of the attackers that will impact the clock.
Discard will receive the troops removed and the cards needing immediate resolution (the Stukas for example.). Whenever eight cards are stacked, and a new day starts a card is drawn. It may be a bonus or a penalty. The distribution of these six cards also allows to set the desired level of difficulty. In normal mode there are three bonus and three penalties. This is particularly where are the cards of the battleship Schleswig-Holstein, pretty wild against the walls!

At first all is well, ammunition is plentiful and the assailants are removed with a shovel. The walls are a little scratched but it is possible to rebuild. And here, it is precisely the fact of raising the Kill throwing the gear. While in the beginning they shoot the enemy on its starting position it is becoming increasingly common to see advance further.
Finally reach the first direct fire walls and five axes are occupied. When it is not possible to place new attackers the morale go down. So the officers lose movements, actions and ammo … it’s always the wrong time.
The exterior walls look like Swiss cheese and some disappear, fortifications of the main buildings are starting to be eroded. Officers twirl to fill gaps, boost morale, destroy the most dangerous attackers or the easiest to “disengage”. And here, it is holding up miraculously until the seventh day and you matched the hero of Westerplatte or you either have died before. To reassure you while taking the path of captivity, remember that orders were to resist 24 hours!

Westerplatte is easy to understand. Provided hold seven days is not a coincidence, moreover there is no dice in the case and to win you must eliminate almost all German cards. We must therefore optimize everything. Each officer will in turn find ways to be as efficient as possible, to use its full potential to strengthen Poland’s position, destroying most of the attackers and save resources. 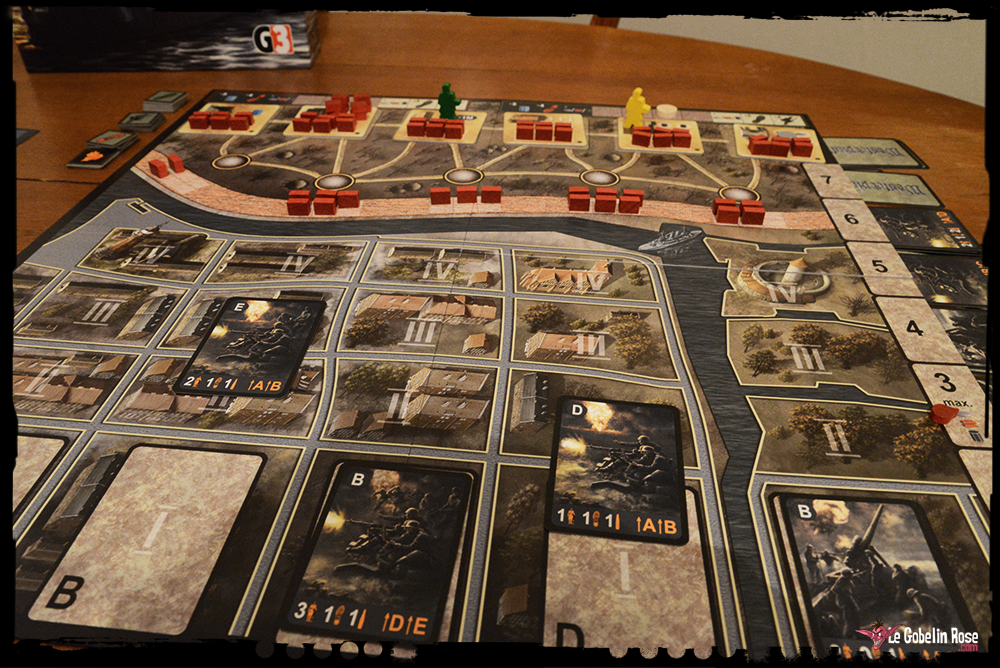 Management morale is tricky. It is tempting to assign a full-time officer, but it also means the loss of capacity for action. Solo cannot control that two men, we must make tradeoffs ever. Some weapons such as mines or mortar are very powerful, it is imperative to use them against the most powerful forces. Enemies with a single point of resistance are instead the main target of gunfire from the forward positions, for which ammunition is easier to have.
Rebuild the walls is of course useful, but you must not underestimate the building that used to push back the attackers. When multiple enemies can open fire at German phases, walls begin to melt at high speed, then it is to keep the shock, to prevent the destruction of buildings and manage the shortage of ammunition, wall, movements, in short, to delay the inevitable end.

The notice of Globul
This is a theme for the least original. Of course, we must make an effort to rule in English. The material is correct and legible, special mention for the grid that allows to segment the bottom of the box. A little too wooden blocks for my taste and officers of the same wood.
The gameplay is really damn good, it’s balanced, twisted. It is constantly and yet the threat swells gradually. The ability to play solo is quite significant, even if we lose the possibility of the headaches friendly between players. The psychological dimension is also interesting because it involves both the different ways to defend themselves and the way we perceive and appreciate different threats.
The theme is clear coup replayability may suffer, but on the other side as long as we did not win we stay well motivated. Later, after a victory, it will be time to try again in a harder mode. 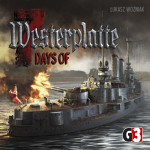